CHRISTUS spent nearly a month responding to Hurricane Harvey, starting Wednesday, August 23 when CHRISTUS Spohn, in the Coastal Bend, called a code yellow and activated its emergency operations center in response to the National Weather Service’s announcement that Harvey would hit Corpus Christi as a hurricane on Friday. Below is a detailed account along with pictures, stories and other news coverage of the CHRISTUS response

On Thursday, August 24, CHRISTUS began transferring dialysis and NICU patients from CHRISTUS Spohn to CHRISTUS Santa Rosa in San Antonio, as there were concerns about the City of Corpus Christi’s water system. The announcement was made CHRISTUS Spohn Hospital Corpus Christi-Memorial hospital and its Emergency Department would close. CHRISTUS Physician Group clinics and Promptu Urgent Care facilities announced they would be closed on Friday.  At the time, large amounts of rain were forecast for San Antonio, and other CHRISTUS markets began to prepare. The most vulnerable and smallest of patients in CHRISTUS Spohn’s NICU would be transferred to The Children’s Hospital of San Antonio. 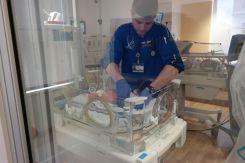 Hurricane Harvey was upgraded to a Category 4 storm on Friday, August 25, and the City of Corpus Christi called for a city-wide water boil. Wind and rain pick up around Noon, and Harvey officially made landfall at 9:45 p.m. between Port Aransas and Port O’Connor. The community hospitals in Beeville, Kingsville and Alice retained power, with the exception of a few surges and flickers. The Corpus Christi hospitals lost power but operated on generators. In the light of day on Saturday, August 26 one could see that damage to the Spohn facilities was generally minor. The rain became heavy in San Antonio, and the CHRISTUS urgent care facilities in the market closed early due to flooding. 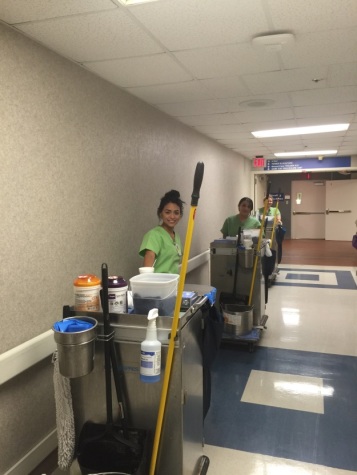 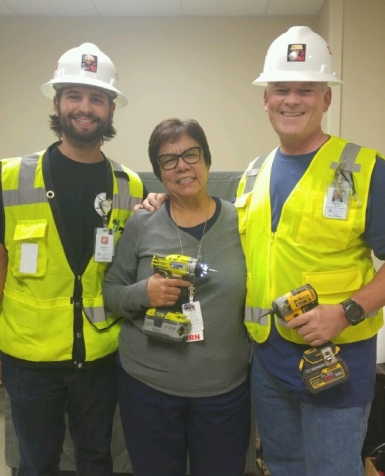 By Sunday, August 27, the City of Corpus Christi had lifted its water boil advisory and CHRISTUS Santa Rosa in San Antonio had accepted 86 patients from storm-affected areas.  The water began receding and all urgent care facilities in the San Antonio area were open.  The Houston area, however, was pounded with water and wind, and the National Weather Service began predicting 20 inches of rain for Lake Charles, so St. Patrick activated a code yellow.

On Monday, August, 28, the CHRISTUS Spohn Community hospitals (Alice, Kleberg and Beeville) were able to lift their code yellow and return to normal operations. CHRISTUS Santa Rosa requested 13 nurses to help care for its increased patient load, so a group of nurses from Texarkana volunteered to go.

Strong rains moved to Beaumont, but the drainage around the campuses seemed to be working well. Beaumont Bone & Joint lost power, but was on backup generator power. The worst was yet to come.

CHRISTUS Shreveport Bossier Health System sent critical care nurses and other medical professionals to Texas to help with Hurricane Harvey relief efforts.  The group gathered together and said their prayers before leaving the Shreveport Regional Airport.

They are relieving nurses in San Antonio who are working around the clock taking in additional patients from the areas of Corpus Christi and Houston.

A team was also sent to CHRISTUS Southeast Texas St. Elizabeth in Beaumont, Texas, to retrieve babies from their neonatal intensive care unit (NICU).   “We flew over on a helicopter, and I saw firsthand just what our sister hospitals were going through,” said one transport nurse with CHRISTUS Shreveport-Bossier. “It was an emotional thing to see, and I’m just happy we were able to get the babies to a safer location.”

They are not the only nurses and support personnel who traveled to help where needed. The response from the CHRISTUS family was enormous and did not go unnoticed by others in the nursing industry. Nurse.com detailed how selfless CHRISTUS Associates were in their response 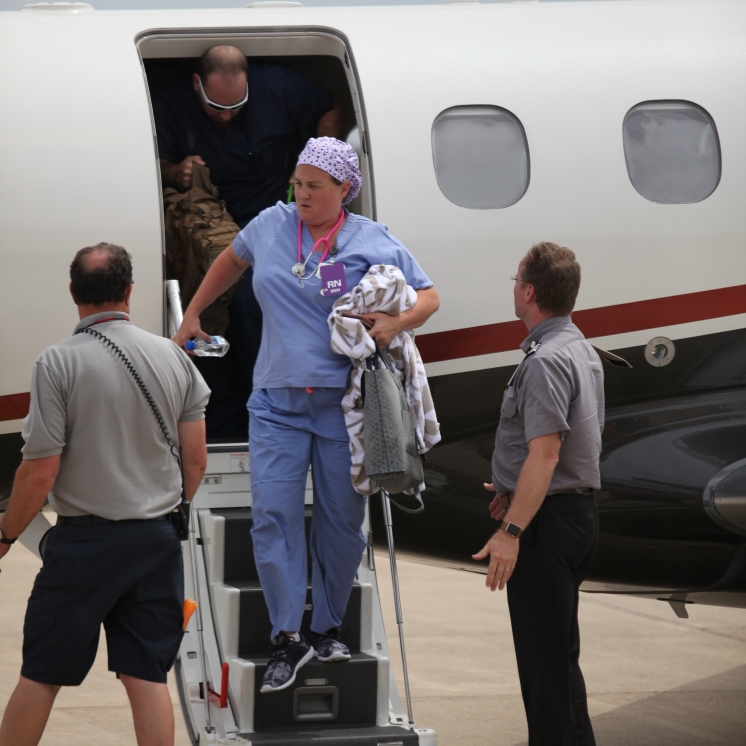 Highly trained medical professionals from CHRISTUS Cabrini, in Alexandria, La also left on Monday, Aug. 28, to go to South Texas to help where help was needed.

On Tuesday, August 29, the CHRISTUS Spohn hospitals in Corpus Christi lifted their code yellow and returned to normal operations, but Beaumont had come under pressure. The Houston offices and clinics remain closed. Flooding in Lake Charles remained localized, and the facilities there worked to address minor water infiltration. Localized flooding also occurred in outlying communities outside of Beaumont, but there was no major flooding around any of our hospitals. Flooding intensified throughout the day, though, so leaders began closing outpatient centers in the afternoon.

For six vigorous days, CHRISTUS Spohn cared for patients and supporting each other under extreme conditions.

Top leadership at CHRISTUS Health in Irving, Tx traveled to Corpus Christi to visit with those Associates who accepted the great responsibility of caring for patients under the most stressful of conditions. 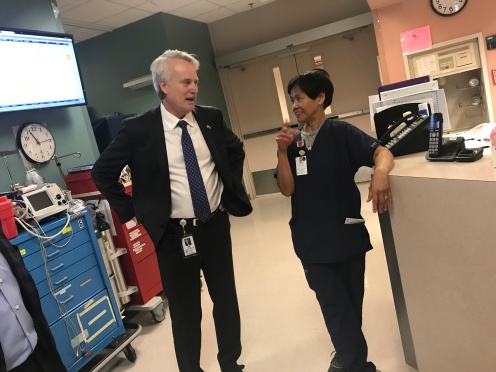 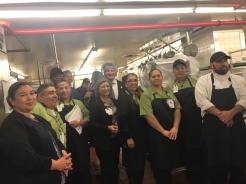 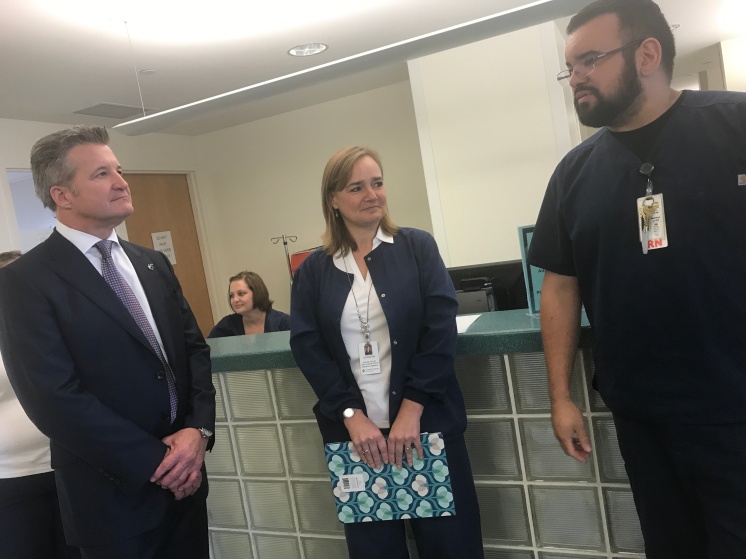 Justin Doss, CHRISTUS Spohn’s Market President said this in a message to Associates who worked tirelessly to ensure patients received the very best care, even during the most stressful and difficult times.

“Hurricane Harvey proved to be erratic and with short notice you adjusted quickly.  At the height of the storm CHRISTUS Spohn had 1,059 Associates working system-wide. We had the awesome responsibility of caring for more than 300 patients.  Each of you is brave and generous; and, you remind me that you are why our ministry has flourished for more than 100 years.”

ABC News and other news outlets began telling stories of caring for patients during the Hurricane. This story from KIII-TV in Corpus Christi, tells of one such story.

GMA followed another story. One of a mother who gave birth on Tuesday to a baby girl.  Mom, dad, siblings and newborn were resting comfortably after a harrowing ordeal.  They lost their Port Aransas home just due to Harvey.  Mom wasn’t sure she would be able to make the scheduled c-section delivery.

On Wednesday, August 30, we learned that Beaumont received 26 inches of rain the day before alone, and the area was experiencing catastrophic and life-threatening flooding. The Southeast Texas area activated their Emergency Command Center and began defending against some leaks.

CHRISTUS Cabrini, in Alexandria, La sent three nurses to help in Texas.  These nurses left for Beaumont in a Blackhawk Helicopter. Beaumont at this time had essentially become an island with no way to get to the city unless by boat or air. 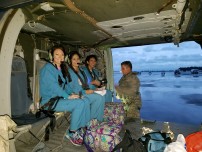 In the midst of all this, other powerful stories emerged such as the reunion between a father and his two children, a 10-year-old and a 14-year-old. They were separated during an evacuation from their flooded home. The two children were delivered alone to CHRISTUS St. Elizabeth, and CHRISTUS moved quickly to find their father. You can watch a report from CNN about their reunion on CHRISTUS St. Elizabeth’s Facebook page.

On Thursday, August 31, the City of Beaumont turned off its water system, but CHRISTUS St. Elizabeth remained open and treating patients. CHRISTUS began working to transfer dialysis and NICU patients. Seventeen nurses from CHRISTUS Trinity Mother Frances arrived in Beaumont to care for patients.  Another hospital, (not CHRISTUS) in the city of Beaumont,  announced they would close and transfer all patients to other acute care facilities.

CHRISTUS Southeast Texas would not close. The hospital would stand by the community  it serves.

By 9 a.m. on Friday, September 1, CHRISTUS St. Elizabeth had transferred out 37 adult patients and 11 NICU patients. The hospital continued to operate under emergency conditions, and a team began working to install an auxiliary water system that we hoped would pump water up to all floors of St. Elizabeth.

The good news for the day was that the clinics and facilities that are part of the CHRISTUS Foundation for HealthCare in Houston were all up and running.

CHRISTUS St. Patrick Regional Cancer Center also stayed prepared and willing to help others.   They announced they would open the schedule to treat patients from areas affected by Tropical Storm Harvey.

Staying open despite immense challenges earned CHRISTUS Southeast Texas a lot of praise from community leaders and others who took note of CHRISTUS St. Elizabeth.

In the Coastal Bend,  the CHRISTUS Spohn CareVan, a mobile health clinic, scheduled visits in the devastated areas of Aransas Pass, Refugio and Rockport.

CHRISTUS Spohn Associates would then travel to Rockport to volunteer  to help with clean up efforts. 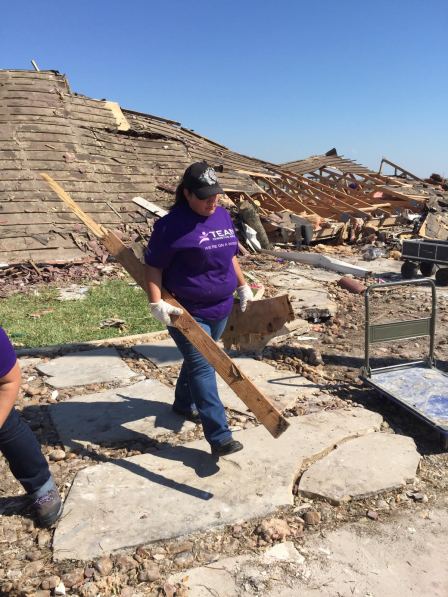 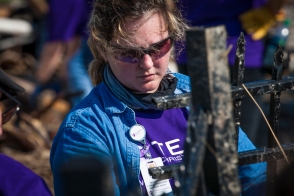 A team of 25 Associates traded in their normal hospital and health clinic attire and put on work boots, heavy work gloves. They came prepared with saws, rakes and limb cutters to help out their community.

Cindy Powers, the infection prevention specialist at CHRISTUS St. Elizabeth, in Beaumont, Texas says now that the community is entering the cleaning phase there is new cause for concern.

“One of the most important things is to make sure you protect your feet and your hands as you clean up,” said Powers to Beaumont television station, 12 News. “So wader boots, knee boots and then heavy gloves and then don’t touch your eyes, nose or mouth with your contaminated hands.”

One thought on “Harvey: The CHRISTUS Response”