Half a pencil eraser – That was the size of the melanoma spot found on Amanda Durand’s back during her son’s annual skin checkup. Amanda’s grandfather died of Melanoma at an early age, so like most moms would be, Amanda has always been diligent in making her children’s checkups.

During her son’s yearly checkup in 2014, she asked the doctor to glance at a place on her side. Upon inspection, he noticed a spot on her back and asked if the place had been bothering her. Amanda was unaware of the spot nor had experienced any problems. The dermatologist determined it was colorless, A-typical for the usual signs of skin cancer, but removed it anyway out of an abundance of caution given her family history.

A few days later, as she was sitting in class to earn her Bachelor’s Degree, she received the news that the precautionary removal was in fact melanoma.

“I immediately thought, ‘I’m going to die’. At 36 years old with two kids, I pleaded to God to just let me see my kids grow up. I was terrified.”

The next few hours and days were a blur. She was able to see Dr. Watkins the same day as receiving the news and had surgery the following day to remove an area the size of a grapefruit around the original spot on her back for testing.

In about a week, the testing revealed the melanoma had spread to her lymph nodes and she was given a rare melanoma diagnosis. Her treatment plan began immediately spear-headed by both her surgeon, Dr. Wayne Watkins, and her oncologist, Dr. Steven Saccaro who worked closely with the physicians at M.D. Anderson regarding the rarity of the cancer.

The plan included removal of about 12” of skin under her arm and down her side into the muscle to ensure the infected lymph node was cleared.

“I met five people at M.D. Anderson with the same rare cancer as mine. They were all from Louisiana and all young, between ages 19 and fifty. Unfortunately, all of them have died. That’s overwhelmingly scary and sad on so many levels.”

Amanda’s treatment at M.D. Anderson was followed by a year of chemotherapy at CHRISTUS St. Frances Cabrini.

“Dr. Saccaro, Casey Gill and the whole team were my lifeline during that year. I was in the cancer center 5 days a week for chemo, fluids, steroids – you name it. There’s no way to put into words what they do there, not just medically but emotionally and spiritually. I just can’t imagine going through that with anyone else. They were amazing.”

The effects of that half-an-eraser-size spot resulted in the removal of her lung’s middle lobe this past July.

“I’ve learned to take one moment at a time. Literally. And I’ve learned through this long battle, the one person I can always count on no matter what, is my God. I can’t tell you how many moments I would be laying there in pain, sick to my stomach, aching and the scripture ‘Be still and know that I am God’ played over and over in my mind.

He carried me during so much of that year. It is so true what it says in Corinthians, ‘His power is made strong in my weakness’. All those days when I was at deaths door and we didn’t know if I would make it; when it was a moment-by-moment struggle and I couldn’t verbalize what I was feeling or exactly what hurt, God knew. He was the only one who knew and He was faithful to never leave me and always send me help.”

Amanda credits many of God’s helpers to the faithful and devoted team at CHRISTUS Cabrini’s cancer center in the comforting, steady, and holistic way she was treated. Today, Amanda is celebrating her latest cancer-free results, but she will continue to get checkups every three months for the next decade.

“I encourage everyone I know to get yearly checkups. This is not JUST skin cancer like so many people casually say. This is a silent killer that completely uprooted and changed my whole way of thinking. I would have never been suspicious of that spot on my back had I not been at the doctor already. That day changed me forever. Before my diagnosis, I sweated the small stuff at work, with friends and throughout life. Now, those every day challenges aren’t even on my radar anymore. I can say with full conviction, I really appreciate my life and my kids do too. 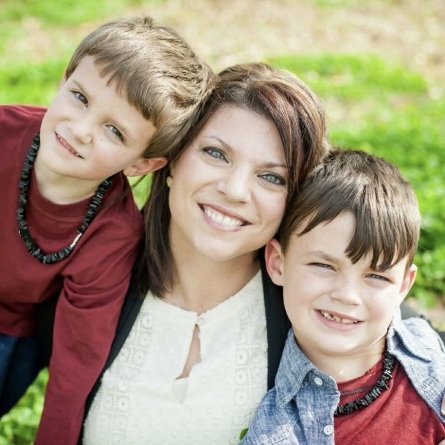 I am keenly aware it was touch-and-go for me for a while but through it all, my kids saw me fighting on my knees in prayer. Words can never express how grateful I am for the Divine intervention of God through the healing arms of my Cabrini family during this crisis. But I certainly hope this season is behind us for good.”